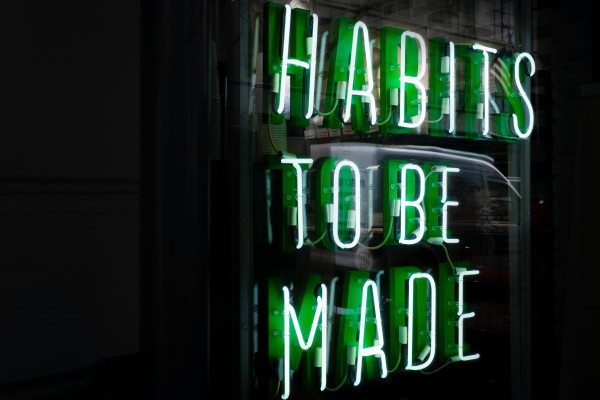 You know we love to talk habit here at Peak. In fact the 66 to 157 day time period it takes to create a habit is firmly cemented in our foundations. But today, I will introduce a technique that's new to myself, that may revolutionise the habit making game- Action Triggers.

A habit- “a settled or regular tendency or practice, especially one that is hard to give up.” is a change in the brain. If for the better would be called neuroplastic, but if for the worse a maladaptive change. Either way, when we are talking about habits we are actually talking about the neuroscience of brain changes. Which is why, much like other tissues, it takes a certain time frame to create or change. Much like Wolf’s law dictates, “boney” tissue adapts to the specific load placed upon between 3months and decades. And Davis states the same about contractile muscle tissue over a 6-9 month period. The brain or nervous system also adapts specifically over a 2-4 month period.

But back to the reason you are here. While reading “High Performance - Lessons from the best on becoming the best” By Jake Humphries and Professor Damian Hughes. I came across a technique called “Action Triggers”. Professor Damian Hughes references a study in which extra marks would be given out for the students who wrote a small essay on what they did on christmas eve. Sounds easy enough right, the catch had to be submitted by Boxing day. They split the class into 2 groups. Group A and Group B. Now Group A were told this and nothing more, while Group B were then asked to write down when and where they would write this essay.  Much to the professors surprise Group B handed in twice as many essays as Group A simply because they wrote down weeks before when and where they would write this essay.

This technique has since been known as an Action Trigger. The formula looks like this: “When I do X, I will also do Y. For example when I wake up, i will brush my teeth,or when I go to the toilet, i will also wash my hands. Fairly normal straight forward habits. But a technique nevertheless shown to scientifically improve the adherence and therefore creation of habits.

Here are a couple real life examples you could try; When I walk into the kitchen I will do 10 push ups, When I watch tele, I will also turn off my phone. By a difficult action to an easy everyday one we create a trigger or reminder to the more difficult action.

You can take this one step further and use another technique by James Clear called “habit stacking”. The formula for this looks like “After i do X, I will do Y”. Only a small difference but could make all the difference. This works by stacking habits together for example.
After I wake up, I will then make my bed.
Once I've made my bed, I will have fruit and yogurt for breakfast.

After I've had fruit and yogurt, I will go for a walk.

And before you know it you’ve stacked 3 or 4 habits together continuously, creating ease for yourself.

In summary, create an action trigger whether it be writing down the time and place you will do a specific task. Associated habits with parts of your daily life I.E when an advert comes on, i will do my exercises. You could even place a reminder or alarm on your phone much like you would a dentist appointment or meeting time to do a specific task or habit. And finally habit stack, When i do X, I will also do Y, and become the master of habits.