Can you read minds with your body? 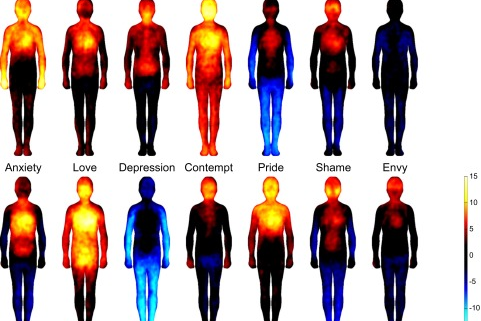 It is well known that our minds carry our emotional stress. But our body holds to stress and past memories and emotions too. It is also known that we often experience emotions directly in our body.

According to American neuroscientist Dr. Cadnance Pert, the “body is our subconscious mind” and our physical body can be changed by the emotions that we experience. She also suggested that unexpressed emotions are logged in the body.

What is also interesting is that different emotions can be experienced in different parts of the body.

A study from 2013 carried out on people from European and Asian culture, has shown that emotions are represented in the somatosensory systems as culturally universal categorical somatotopic maps.

In five different experiments, the participants were asked to colour two silhouettes of bodies alongside emotional words, stories, movies or facial expressions.

The task was to colour the bodily regions whose activity they felt increasing or decreasing while viewing each stimulus.

The body sensation maps appeared to be in line with the evidence from brain imaging and behavioural studies. They also have shown that sensation patterns associated with each emotion correspond with changes in physiological functions associated with different emotions.

The maps have been presented as images where the upper row shows the basic emotions and the lower non-basic. The warm colours show regions whose activation increased and the cool colours represent the decreased activity in the area.

According to the study anger and pride fire up the head, neck and shoulders while love and happiness fill almost the whole body.

Anxiety and fear activate the chest and depression deactivates most parts of the body creating feelings of fatigue and heaviness.

As the study has shown the upper part of the body, especially head, face, neck and shoulders is more sensitive to emotions and even within a few seconds of experiencing a negative emotion, people automatically tense the muscles in their jaw and their face. With repeated stress muscles around the neck and shoulders get shorter and tighter creating pain, discomfort and reduced range of motion.

Therefore it only makes sense to see the connection between our emotions and changes in our body.

Having awareness that our body can store emotions in form of physiological changes is important starting point to healing as sometimes is not only working on the physical body that is necessary to get rid of pains and aches, but working on releasing negative emotions through energy work, grounding techniques, meditation, breathing etc and listening to our body to allow for that to happen may be necessary.