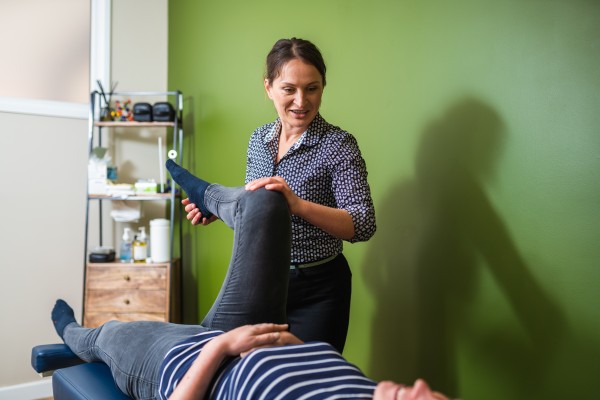 By Magda Hip flexion happens every time we step, squat, sit or cycle and even though we do the movement instinctively, it is quite a complex mechanism that allows it to happen.

Hip flexion means that our thigh comes closer to the chest. It is also the first range of motion that we try to restore when there is restriction in movement of the hip and there are really good reasons for this. Read on to find out more!

There are eleven muscles that flex the hip joint:

These muscles also have additional roles that sometimes overlap and at other occasions are totally opposite- depending of which part of the muscle is being used. For example, the adductor magnus and gluteus medius are able to flex and extend the hip depending of which muscle fibres are used- anterior or posterior.

At the same time limitations in hip flexion lead not only to pains and aches in the hip area but also put stress on hamstrings. Without adequate hip flexion during swing phase of the gait, knee flexion is more dependent on hamstring muscle activity.

This can be felt the most as discomfort when walking upstairs or slopes, which requires lifting the leg.

Therefore when we treat hip flexion, in 99% of the cases we also improve the hip internal rotation and ultimately the gait (the walking, running pattern)How do you know which of the muscle is involved?

When it comes to the assessment of the hip flexion what we ideally want to see is that the thigh should be able to lie flat on the chest when a person is lying down on their back. If that’s not the case, then we usually see three common pain patterns:

Generally speaking, the muscles that perform hip flexion must be strong enough and able to shorten (muscular weakness is addressed in our first chapter of care) while the muscles doing the opposite action must be able to lengthen, which is all address in the second phase of care!

Therefore tightness in muscle such as the hamstrings, gluteus maximus and posterior fibres of gluteus medius and adductor magnus is very likely to restrict hip flexion and that is when the myofascial treatment comes in to play.