Why The Kids Are Keeping You Awake At Night! 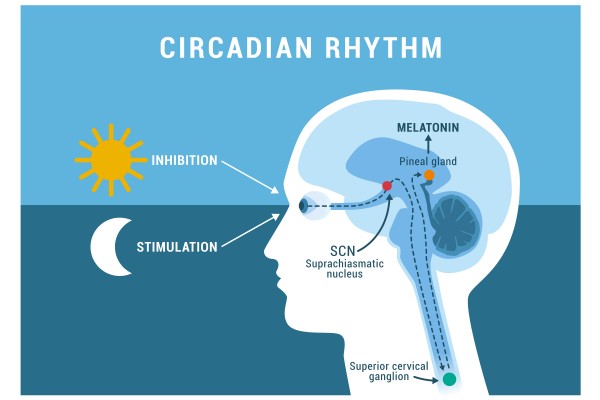 Having spoken to many of my clients recently about sleep, a recurring question or statement is appearing. Whether it be from parents or teachers, many have expressed how they are surprised at the amount of children taking a melatonin or similar supplement/ medication to aid sleep.

Coincidently having recently researched into the area of artificial light and its effect on our circadian rhythm and pineal gland function I am hoping to shed some light on this.

Your circadian rhythm is an in-built body clock that is designed to initiate the release of sleep hormones hours before we intend to sleep. This happens when less light enters our eyes such as when the sunsets. The small amount of light entering our eyes stimulates our pineal glands (a small raisin-like part of the brain) to release melatonin. Melatonin is a naturally produced hormone responsible for helping us to fall and remain asleep during the night.

Side note; Melatonin is not responsible for us feeling tired or wanting to sleep. That is a chemical called adenosine which builds up in our brains while we are awake. The two systems work together but operate separately. Melatonin's job is to help us fall asleep and remain asleep for the 8 hours we need as humans for optimal brain function.

While researching the effects of artificial light, also known as blue light, it its shown to trick our pineal glands into thinking there is still daylight. The artificial light increases the amount of light entering our eyes and the stimulation of the pineal gland and release of melatonin is delayed.

That being said, it is no wonder children and adults who spend the 2 or 3 hours prior to sleep watching television, on their phones or console games can then struggle to get a full and efficient 8 hours sleep. It’s not through lack of trying or motivation but instead biology. Through their actions they are suppressing their bodies inbuilt systems designed to ready you for sleep.

So why than take a melatonin supplement which A) reinforces your bad night time habits B) perpetuates a societal normal that if something isn't working there's a magic pill to fix it and C) often isn’t successful in achieving the full night sleep after anyway.

Instead reduce your artificial light exposure 2 to 3 hours before sleep which means less television, less social media and less games and allow your body to do the very thing it has evolved and adapted to do over millions of years through trial and error.

If that wasn't motivation enough, read my other blogs discussing the link between poor sleep and poor brain function, which goes as far to explain how recent research has linked poor sleep as a baby and developing Autism.